What is the Federal Reserve’s role?

Because of the media coverage of the Fed’s (Federal Reserve) influence on interest rates, many people mistakenly believe that the Fed “sets” all interest rates. In reality, the Fed only has the ability to set the Discount Rate, which is the rate they charge banks that borrow directly from the Fed (which is very rarely done and usually only in an emergency) and the Interest Rate on Excess Reserves (IOER), which is the rate the Fed pays banks on their excess funds. But the Fed does carry out certain financing actions that are meant to nudge the Federal Funds Rate, which is the rate that banks charge each other to borrow overnight funds.

Altogether, these three short-term interest rates influence all other short-term rates, like the Treasury Bill rate and the LIBOR (London Interbank Offer Rate). All other rates, and particularly the longer-term rates, are determined by market forces. Investors collectively determine what rates they demand to earn on investments depending on the credit and term, and prices of the investments then follow suit. When the market is demanding higher interest rates for longer investments (known as an upward sloping yield curve), this means that collectively the market thinks interest rates will be higher in the future.

Why does the Fed push to increase & decrease interest rates?

The general level of interest rates can have profound impacts on the economy, and ultimately on employment prospects. Rising rates usually occur when the economy is expanding rapidly, and the labor market is robust. By demanding higher rates, the market is saying that it expects inflation in the future along with high growth. In such an environment, the FED may take actions to push rates higher in order to cool economic growth and dampen down inflation. This rise, however, can be influenced by inflation, the level of the stock market and other factors, and may not always be a constantly rising line (as in the recovery from the 2008 Financial Crisis).

Conversely, rates are usually falling when economic growth is slowing down because investors, in general, predict a slower economy and lower inflation in the future. The Fed typically tries to push rates lower in these times to stimulate economic growth. Lower rates are meant to make it easier for businesses to borrow and finance expanding economic activity.

How do interest rates impact my personal finances?

The level in which interest rates impact your personal finances depends on whether you are a borrower, a lender or an investor- you can be one or all these things at any given time. 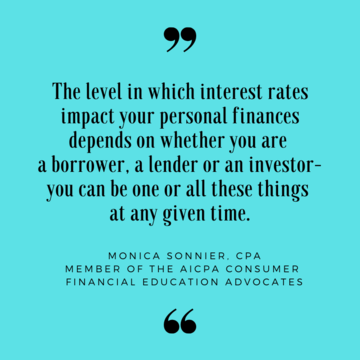 If you are a borrower, rising interest rates will usually mean that you will pay more for borrowing money, and conversely, lower interest rates will usually mean you will pay less. How much of an impact will all depend on whether your borrowing is tied more to short-term rates or longer-term rates. Shorter-term consumer loans like credit cards, home equity loans or auto loans are usually tied to short-term rates like LIBOR or the Treasury Bill rate. Longer-term loans like student loans and home mortgages usually are based on the 10-year Treasury Bond rate. Your interest cost will rise as rates rise, of course, if your loan is a floating rate, but will stay the same if you have locked in a fixed rate.

Fixed-rate loans have a rate and payment amount that is locked in at the origination and does not change for the term of the loan. Variable or floating-rate loans have a rate that is set at some spread over an index that will reset at predetermined intervals and therefore could rise or fall along with the payment amount. But rising rates could have other impacts, particularly on the housing market. Rising rates may keep home prices from appreciating because it makes it harder for buyers to afford a mortgage on home at a higher price.

You may not think of yourself as a lender, but if you have bank deposits,CDsorbonds, you are a lender. You have loaned your money to a bank, a corporation or maybe the federal government, with the expectation of a return in the form of interest. As with your loans, if you have locked in a fixed rate on these investments, the rate you earn will usually stay the same for the term (unless it has a floating rate built-in). But a rising rate environment will give you the chance to reinvest your money at higher rates as your original loans mature. If your investments have a way to go until they mature, unfortunately, the value of the investment will decline as rates rise. This is because as the general level for rates that the rest of the market demands rises, your fixed-rate loan or bond looks less attractive and therefore must carry a lower price. The opposite happens to all fixed-income investments when rates fall, the prices or values appreciate as they become more attractive relative to current lower rate offerings.

If you are an investor in other types of securities like equities or real estate, the level of interest rates can also impact the value of your holdings, although the effect is generally more indirect. As mentioned above, the value of homes and other real estate generally benefit from a falling rate environment. This is not only because people can afford higher-priced homes but also because real estate investors can make higher returns when they are paying less to borrow on the real estate. The stock market is also impacted by the level of rates because equities are just another alternative investment that the market is constantly weighing against other opportunities. Stocks and bonds are alternative investments so investors are always comparing the yield they can get on a stock (the dividend amount divided by the price) versus the yield available on a bond. So, when rates are falling, the dividend yield on stocks tends to look more attractive next to lower-yielding bonds, thus stock prices will tend to rise as they will be more in demand. The dividend yield on the stock is lower if the price of the stock rises. Conversely, when rates rise and higher bond yields are plentiful, stocks will have a harder time competing and thus prices will fall to compensate for the lower yield.

So as with many things in life, whether a rising or falling interest rates are “better” depends on which side of the coin you are on. Even the Federal Reserve does not really favor lower over higher rates in general. They just want a moderate level of rates that is steady, predictable and conducive to a healthy level of both growth and inflation in the economy. Because ultimately, the market values steady growth and hates uncertainty above all else.