NEW YORK (December 19, 2017) – How much is that doggie in the window? Before opening your home and your heart to a new pet this holiday season, it’s important to know how often you’ll have to open your wallet. Whether your companion is a puppy, parakeet, hamster, cat, fish, or iguana, pet ownership comes at a cost. A new Harris Poll conducted by telephone for the American Institute of CPAs (AICPA) found that more than half of Americans (54 percent) have a pet in their home and the cost of that companionship is impacting their finances.

The survey found that, on average, American pet owners spend $1,560 per year on just their pet’s routine care (feeding, grooming, boarding, scheduled visits to the vet), based on an average monthly cost of $130. When you consider that more than half of Americans have less than $1,000 in their savings (according to a recent GoBankingRates survey), it’s clear that some pet owners are sacrificing their own financial goals to cover their pet costs.

“Owning a pet can be an incredibly rewarding experience, but it’s also a long-term financial commitment,” said Greg Anton, CPA and Chair of the AICPAs National CPA Financial Literacy Commission. “It is important to incorporate both routine and unpredictable pet expenses into your budget to help ensure your own financial plan will not be disrupted.”

Nearly a quarter of pet owners (23 percent) admitted the cost of pet ownership is more than they expected. Food, toys and routine care are foreseeable costs, however, there are additional expenses, such as emergency medical care or boarding, that can arise without warning. If an emergency expense were to present itself, three-quarters of American pet owners (76 percent) said they would make financial sacrifices to pay for it. Four-out-of-five (79 percent) shared that they would stop eating at restaurants and two-thirds (67 percent) would give up their vacation to pay for pet related expenses if they were in a difficult financial situation.

Once a pet becomes part of the household, it’s doubtful people would ‘cancel’ their pet to save money like they would a cable television subscription. In fact, three-in-five American pet owners (61 percent) said they’d do the opposite and sacrifice their cable and TV streaming services to pay for their pet expenses. A third of pet owners (35 percent) would even sacrifice their cell phone plan.

While saving money on cable and cell phone plans could actually be advantageous, some American pet owners would take steps to help their pets that could negatively impact their finances. A little more than one-third (37 percent) said that they would sacrifice contributions to their retirement account to pay for pet-related expenses, putting their own future financial wellbeing at risk. Even more alarming, one-in-four American pet owners (27 percent) would forego paying their credit card bill to pay for their pet’s expenses, leading to potential penalties, interest rate hikes and a lowered credit score.

Individual pet owners said that to pay for emergency expenses they would be willing to “give up everything in the house,” their “quality of groceries” and even “cut back on the amount of money spent on grandchildren.” A few pet owners went all in, saying that they’re willing to “give up anything” to ensure their pet is taken care of. While you are committing to caring for your pet once you bring it into your home, planning ahead can help keep this commitment from sending you into financial distress.

“As you consider bringing a pet into your family, understand that you’re making a substantial investment of both time and money,” added Anton. “The costs of your ‘new family member’ will go far beyond bringing them home so it’s important to budget for the lifetime of the pet.”

Pet ownership can be a fulfilling experience that should be approached with knowledge of the costs. To help Americans fully understand the financial commitment that comes with bringing a pet into their home, the AICPA’s National CPA Financial Literacy Commission has the following tips:

For more tips and information on managing your personal finances, visit 360finlit.org.

This Harris Poll was conducted by telephone within the United States between September 29 and October 1, 2017, among 1,004 adults (502 men and 502 women aged 18 and over) including 504 interviews from the landline sample and 500 interviews from the cell phone sample. 526 identified as pet owners. Figures for age, sex, race/ethnicity, education, region and household income were weighted (using data from the Current Population Survey) where necessary to bring them into line with their actual proportions in the population. 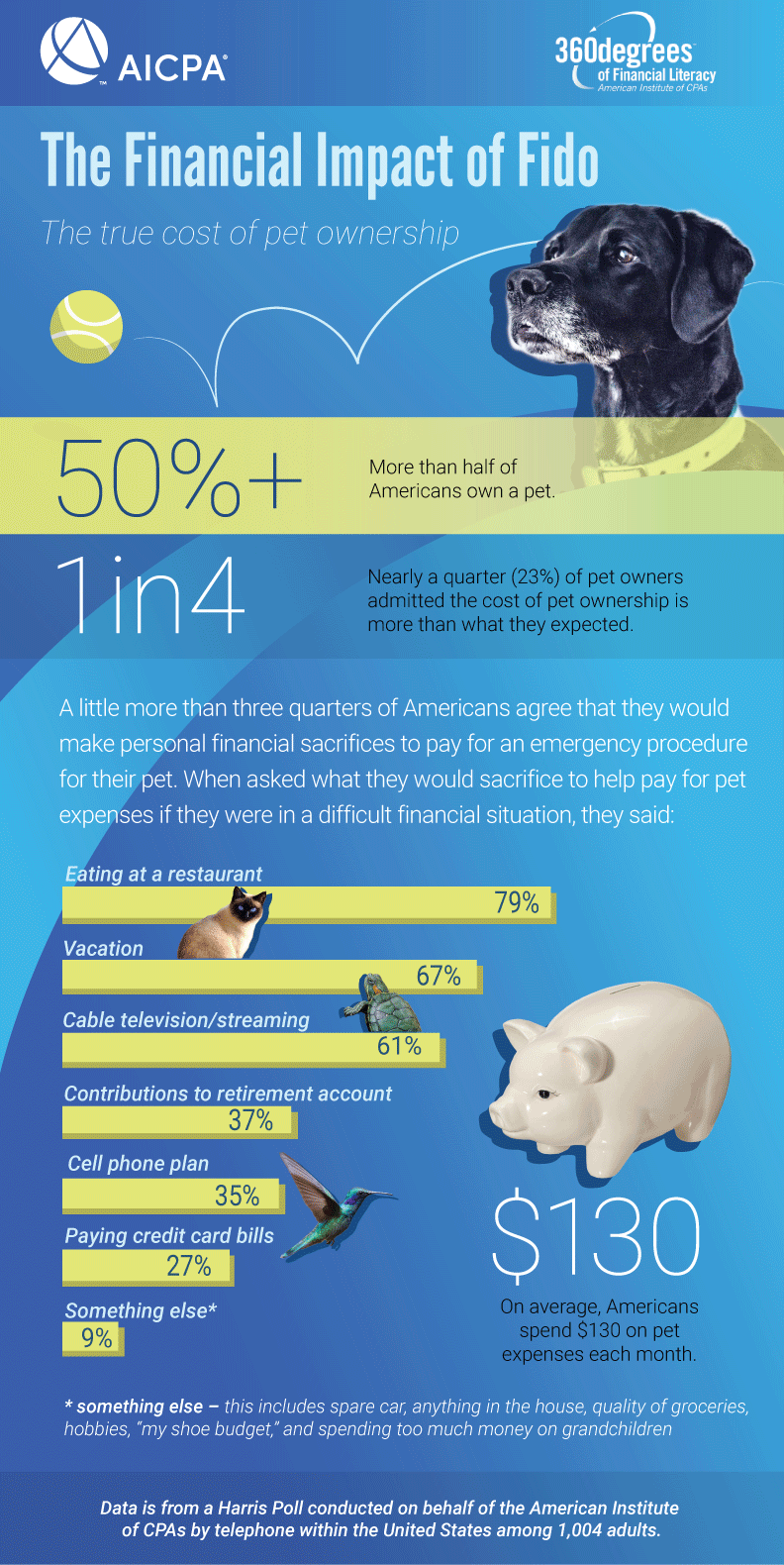