NEW YORK (April 3, 2018) – Another day, another data breach. Recent news about cybercriminals obtaining more than 5 million credit card numbers from high-end U.S. retailers joined a series of major hacks and online data breaches. In 2017 alone, roughly 143 million U.S. adults, were hit by some form of malware, virus, spyware or phishing scam. Unfortunately, the frequency of attacks on Americans’ personal information has fostered a feeling of inevitability. In fact, according to results released today from a telephone survey conducted by The Harris Poll for the American Institute of CPAs (AICPA) of 1,006 Americans adults in the fall of 2017, nearly half of U.S. adults (48 percent) think it is at least somewhat likely identity theft will cause them financial loss in the next year.

“Protecting your information is an ongoing process that requires you to be vigilant, identify where you can improve and take action to firm up your safeguards,” said Gregory Anton, CPA, CGMA, chair of the AICPA’s National CPA Financial Literacy Commission. “This means regularly monitoring your credit card and bank statement and periodically checking your credit report for anything that looks out of the ordinary.”

While the survey finds that three out of five Americans (61 percent) have at least looked at their credit report, more than a third (35 percent) have never once checked. This is particularly alarming, as a majority of those who have checked their credit (66 percent) had to take steps with a credit reporting agency to correct inaccuracies, with the average being 13 specific corrections among those who have taken steps at least once. More distressing, those with a household income of less than $35K were found to be more likely to never have looked at their credit report than those with a household income of $100K+ (44 percent vs. 30 percent).

“Having a good credit score and access to favorable interest rates is something that benefits people of all income brackets, but it is particularly important for those who are in a financial situation where a few percentage points in interest would make a big impact on their financial wellbeing,” added Anton. “Everyone should check their credit score for free with one of the three major credit reporting agencies at least once a year and not wait until suspicious activity occurs.”

The frequency and scope of these cyber-attacks has many Americans questioning the effectiveness of cybersecurity practices businesses currently have in place. In fact, eight in ten Americans (81 percent) said they are at least somewhat concerned about the ability of businesses to safeguard their financial and personal information, with two in five (40 percent) reporting that they are extremely or very concerned.

With security breaches costing U.S. consumers $19.4 billion of their own money, this may be a cause for action. The survey found four in five Americans (81 percent) said they’ve changed their behavior based on the threat of cyber breaches affecting credit card and debit card processing systems.  Those changes include a majority increasing self-monitoring of credit and debit card accounts for fraudulent activity (56 percent), while about 4 in 10 are either using cash and/or checks more often (43 percent) or choosing to shop at locally owned stores more often instead of national retailers (40 percent).

“While it’s positive that American are taking steps to mitigate the risk from cyber breaches, each time there is a new breach in the headlines there is the risk that the public becomes numb,” added Anton. “Identity theft may seem like it’s inevitable, but our message is that it doesn’t have to be.”

A quarter of Americans (26 percent) said they have reduced their online presence, either turning off social media or visiting fewer websites because of concerns about data security. One in five (20 percent) have signed up for additional fraud detection or credit monitoring. Roughly 1 in 10 report they are switching their shopping to different national stores because of concern about data breaches (11 percent), placing a freeze on their credit (11 percent), or shopping online more often, because they feel like it is safer (11 percent). Five percent said they use alternative forms of currency.

The survey found that three in five U.S. adults (60 percent) report that they or an immediate family member have ever been the victim of a scheme to defraud them, including:

Monitor your credit report & set protections. You can request a free credit report from all three major credit reporting agencies once a year, including TransUnion, Equifax and Experian. Additionally, some monitoring services allow you unlimited access to your credit information year-round. These services are there to help you spot inaccuracies, potential fraud and more on your credit report. This should also be done for children. Theft of a child’s ID may go undetected for many years such that by the time they are adults, the damage has already been done.

Don’t provide your Social Security number unless it’s necessary. A space for it on a form doesn’t necessarily mean that it is required. For example, your doctor’s office may use a unique number issued by your insurance company to enter your claim but their form may have a space for SSN anyway. Don’t be afraid to ask if they really need it.

Make sure your WIFI network at home is secured with a password. A skilled data thief can access information on an unsecured network. Additionally, when away from home, avoid providing credit card or other personal information on unsecured Wi-Fi networks like those in airports or coffee shops.

Don’t provide personal information in response to any unsolicited communication. Even if the caller, text or email claims to be from a bank or credit card company needing to “verify” your account to “prevent fraud.”  If in doubt, call the number on your bank statement or the back of your credit card.

What to do if it happens? Act quickly to limit the damage. Call your credit card company and report it to them. They will close your card and issue a new one. File a police report to ensure that you are covered for any damages that you may incur. If your Federal return is affected, call the IRS 800-908-4490 and file Form 14039 Identity Theft Affidavit.

For more information about what to do in the event of identity theft, 360 Degrees of Financial Literacy offers tips here.

This survey was conducted by The Harris Poll by telephone within the United States between October 12 and 15, 2017, among 1,006 adults (503 men and 503 women aged 18 and over) including 506 interviews from the landline sample and 500 interviews from the cell phone sample. Figures for age, sex, race/ethnicity, education, region and household income were weighted (using data from the Current Population Survey) where necessary to bring them into line with their actual proportions in the population. 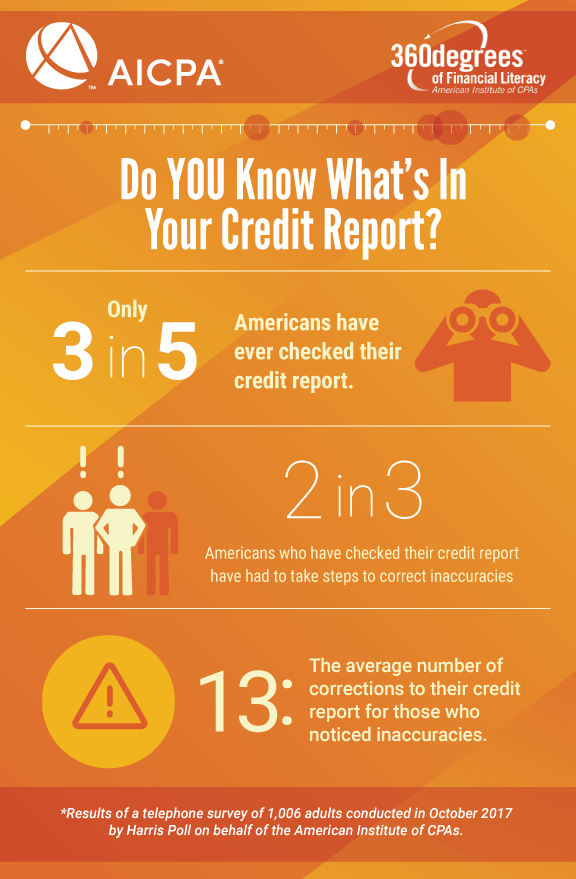