NEW YORK (April 27, 2017) – Fake news, deliberately false and misleading articles, has been all over the news lately. A new survey reveals that fake financial news has the potential to be a real serious problem, and it’s impacting Americans’ ability to make retirement, investment and healthcare decisions. These often completely made up stories are presented to consumers in many forms, such as sponsored content or fake websites meant to mirror the look and feel of credible news sites. Even worse, a majority of Americans say they feel that fake news is going to become even more prevalent in the future.

The risk of making an impulsive financial decision in reaction to a headline or article that may be designed to mislead has the potential to cause serious problems. Acting hastily does not allow the proper time to think a decision through and weigh the long and short-term financial implications. However, more than 3-in-4 (77 percent) Americans feel it's important to act fast to make financial decisions when breaking financial news becomes available, with 40 percent saying it's very important to act quickly. That’s according to a new telephone survey of 1,018 adults conducted in March 2017 for the American Institute of CPAs (AICPA) by Harris Poll in support of National Financial Capability Month.

“Having accurate, reliable financial information is the basis for deliberate and rational decision making,” said Greg Anton, CPA, CGMA, and chair of the AICPA’s National CPA Financial Literacy Commission. “With few exceptions, making snap financial decisions is usually not a good idea. There is a fine line between reacting and overreacting, and Americans should proceed cautiously until they’re able to parse the facts.”

There is widespread awareness about the issue of fake financial news. Almost 3-in-5 Americans (58 percent) believe that fake news is a serious threat to their financial decision making, with more than half of those (33 percent) saying the threat is very serious. Those sentiments are consistent for both genders, among household incomes and across generations.

However, fake news is not just an abstract threat – it’s having a serious impact on Americans’ ability to navigate their financial lives. More than 3-in-5 Americans (63 percent) say that the spread of fake news has made it more difficult to make critical financial decisions. Specifically, they’re having a harder time with healthcare decisions (44 percent), investing in the stock market (40 percent), retiring (36 percent) and buying or selling a house (35 percent). Additionally, 35 percent reported having trouble deciding if they should start a business and 29 percent said it was harder to decide if they should switch jobs.

“Financial decisions around healthcare, investments and retirement can have serious, long-term implications. It can be difficult enough to understand the financial impact of proposed changes in laws and regulations without having to deal with a sea of disinformation,” added Anton. “Social media can serve to amplify the impact of fake news, particularly when many people are sharing articles that come to the same conclusion. It’s more important than ever to verify sources, check the facts and if you’re still not sure, speak to someone you trust before making any financial decisions.”

Unfortunately, most Americans don’t think the problem of fake financial news will be resolved in the near future. Only 14 percent say they expect fake financial news to become less prevalent in the next year or two, with 32 percent saying it will stay about the same. Whereas a majority of all Americans (51 percent) expect fake news and misleading headlines to get more prevalent, with more than half of those (30 percent) saying that it’s going to get much more common.

Fake news is nothing new, but increased awareness of the threat it places on financial decision-making can help keep Americans from being lured into making decisions that will hurt them financially. To help Americans navigate the sea of information and misinformation out there, the AICPA National CPA Financial Literacy Commission offers the following tips:

Survey MethodologyThis Harris Poll was conducted by telephone within the United States between March 24 and 27, 2017, among 1,018 adults (505 men and 513 women aged 18 and over) including 518 interviews from the landline sample and 500 interviews from the cell phone sample. 650 adults self-identified as “non-retired” and 322 as “retired”. Figures for age, sex, race/ethnicity, education, region and household income were weighted (using data from the Current Population Survey) where necessary to bring them into line with their actual proportions in the population. 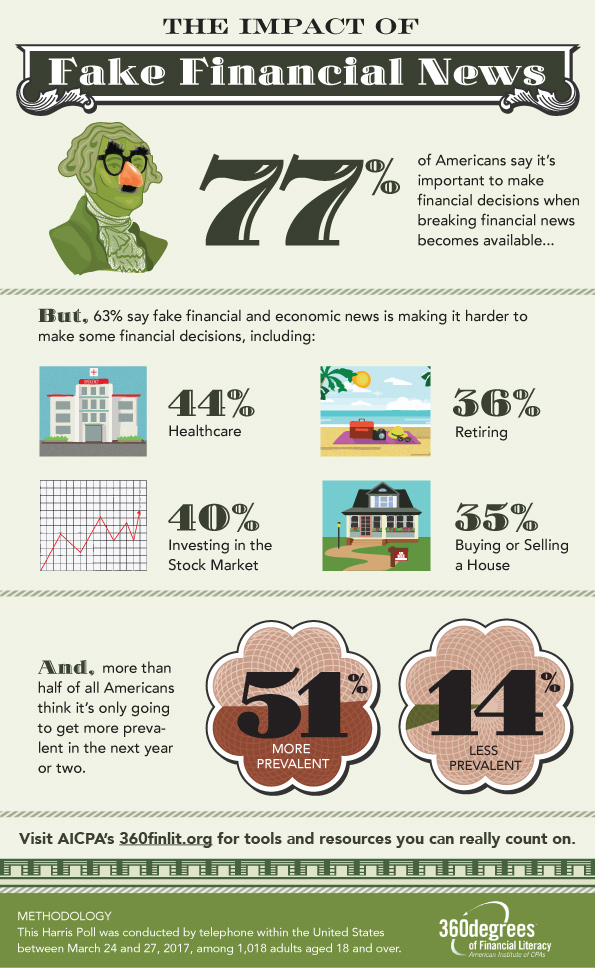