NEW YORK (January 23, 2020) – Thanks to a late 2019 stock market surge, Americans’ financial satisfaction has roared into the 2020’s. The average American should be feeling their strongest sense of financial well-being ever, according to the AICPA’s Q4 2019 Personal Financial Satisfaction index (PFSi) which has reached a new high for the seventh time in the last ten quarters.

What Is the PFSi & How Is It Calculated?

The PFSi is a quarterly economic gauge that measures the personal financial standing of a typical American. The index is calculated as the Personal Financial Pleasure Index (Pleasure Index) minus the Personal Financial Pain Index (Pain Index). These sub-indexes are each composed of four equally weighted proprietary and public economic factors which measure the growth of assets and opportunities in the case of the Pleasure Index, and the erosion of assets and opportunities in the case of the Pain Index. A positive reading of the PFSi indicates that the average American should be feeling more financial pleasure than pain and thus have an overall positive sense of financial satisfaction.

At 40.2, the Q4 2019 PFSi is 4.0 percent (1.6 point) above the prior record of 38.6, which occurred in Q1 2019. It also reflects a 7.8 percent (2.9 point) increase from the prior quarter. The most notable factor driving the quarter-over-quarter advance was the PFS 750 Market index, an AICPA proprietary stock index comprised of the 750 largest companies trading on the US Market. In comparison to its Q3 2019 level, the Market index is up 10.1 percent (9.1 points) and has also reached an all-time high. It continues to be the biggest contributor to the Pleasure Index, now accounting for one-third (33.1 percent) of its total value. And thanks primarily to the Market indexes Q4 surge, the Pleasure index is up 3.4 percent (2.5 points) from the prior quarter and has reached a new all-time high (74.9) of its own, narrowly eclipsing the previous record set in Q3 2018 (74.8).

“The stock market’s performance over the last decade is a perfect example of why it’s important to remain focused on the long-term goals of your financial plan,” said Dave Stolz, CPA/PFS chair of the American Institute of CPAs’ PFS Credential Committee. “If you had gotten out of the market or moved into more conservative assets after the Great Recession, you would have missed out on the decade’s big gains. This underscores why it is important to resist temptation to respond when the market fluctuates and instead stay the course with a financial plan that incorporates a risk tolerance you are comfortable with and a time horizon specific to your personal financial goals.”

The positive gains to the overall PFSi were boosted by the lower overall value of the Pain Index which decreased 1.3 percent (0.5 points) from the prior quarter. The slight Pain index decline resulted from drops in underemployment and loan delinquencies outweighing increases in pain from inflation and taxes. After trending down for the last decade, the current underemployment rate is 6.9 percent, a new all-time low. By contrast, its peak value was 17.1 percent in the fourth quarter of 2009, exactly a decade ago.

Americans’ Financial Well-being Entering 2020 vs. a Decade Ago

The current state of Americans’ financial satisfaction is quite different from this time last decade. Entering the 2010’s, many Americans were still reeling from the Great Recession. In Q4 2009, financial pain significantly outweighed financial pleasure and as a result the PFSi measured -29.6. This negative reading indicates that the average American was feeling very dissatisfied with their financial health. 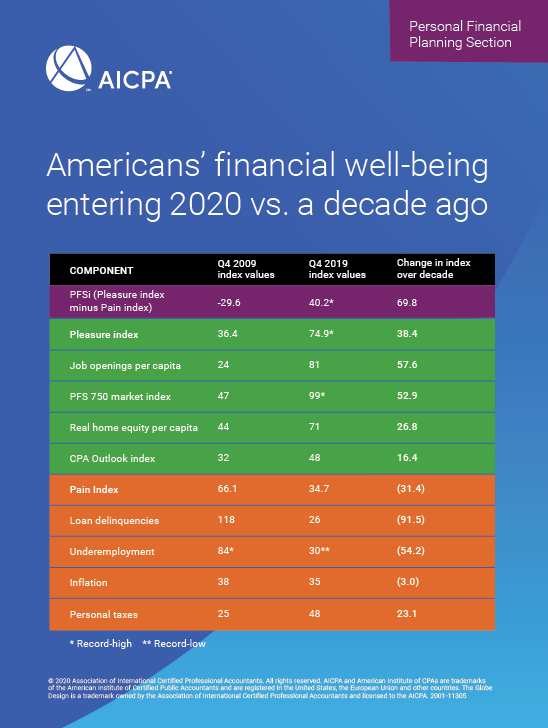 The above chart shows how all the factors that make up Americans’ personal financial satisfaction have changed over the decade. The readings from Q4 2009 are from exactly ten years ago, and Q4 2019 represents the most recent levels. Over the course of the decade, all factors of the Pleasure index increased significantly. However, the most important factor in the improvement of Americans’ personal financial satisfaction in the last ten years was the massive decrease in loan delinquencies. Mortgage delinquencies fell from 9.5 percent to 2.45 percent and bank loan delinquencies from 6.9 percent to 1.46 percent.

The two labor market related factors, Job openings per capita and underemployment, are in close contention for having the next biggest impact on improving the overall PFSi. Underemployment started the decade at an all-time high and now, exactly ten years later, is at an all-time low. A look at the underlying Bureau of Labor Statistics data shows just how substantial of a difference ten years has made-- job openings went from 2.4 million to 7.4 million (204 percent increase). Despite the PFS 750 Market index experiencing the longest bull market in history, helping it go from a total value of $13 trillion to $34 trillion (162 percent increase), it had only the fourth biggest impact on improving the average Americans financial well-being.

“It is encouraging to see such a relatively high number of Americans making loan payments on time, all while building up equity in their homes,” said Michael Landsberg, CPA/PFS member of the AICPA Personal Financial Planning Executive Committee. “However, it’s important to keep in mind the lessons from the Great Recession. This is the perfect time to review all your debt obligations and make sure that you’re not overextended. By taking time to strengthen your financial house now, while economic conditions are favorable, you will be in a better position to ride out the next recession.”

The only factor that did not improve the overall PFSi this past decade is pain from personal taxes. This Pain index factor went up and is nearly double what it was when the 2010’s started. It is worth noting that at the beginning of the 2010’s taxes were low on a temporary basis as part of an economic stimulus package. 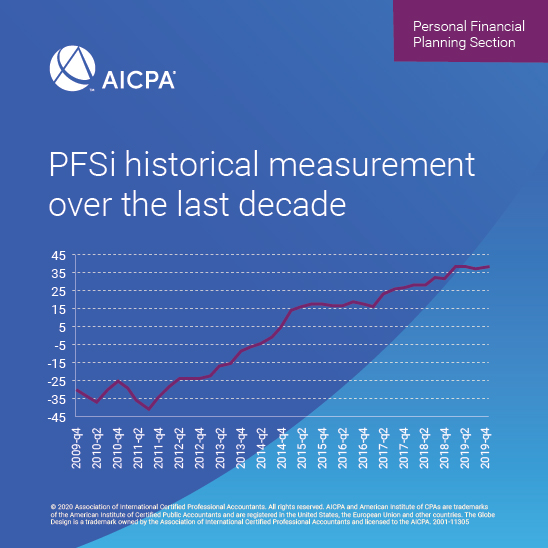 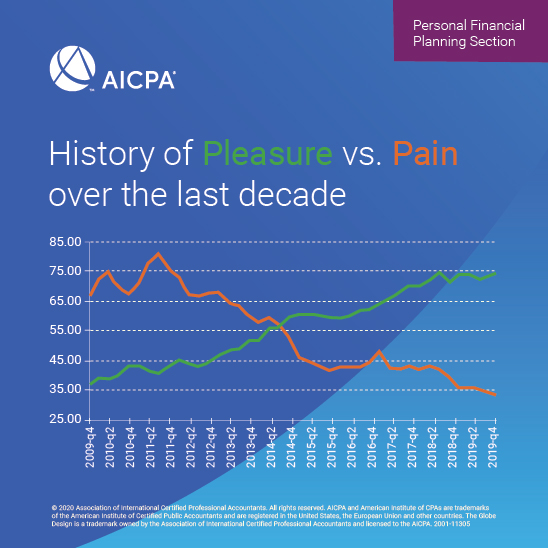 Two years into the 2010’s, the PFSi hit its all-time low of -40.4 in Q3 2011. Since then, the index steadily gained about 3 points per quarter until Q4 2015. In that period, the biggest contribution to its gain was a reduction in loan delinquencies, followed by a reduction in inflation. Between Q4 2015 and Q1 2017 the PFSi stayed relatively flat. Since Q1 2017, it has gained about 2.2 points per quarter, taking account of 3 quarters with modest weakening. Three factors are in close contention for leading this improvement: gains in the PFS 750 Market index, increases in job openings and reductions in loan delinquencies. The next most important factor has been reduction in inflation.

Additional information on the PFSi can be found at: www.aicpa.org/PFSi.